Welcome back – we hope you had a good week!

To start with today, we have another challenge for you!

This one is called Save The Joker, and to complete it you will need a pack of cards and a small jar or container (e.g. a spice jar). 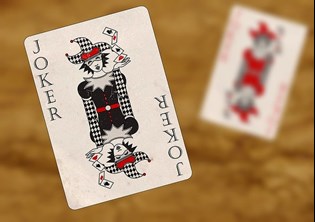 Find a joker in the pack of cards and place it face up on top of the jar.  Then place the rest of the cards on top of it in a pile. (If you don’t have normal playing cards, you can use any cards. Just make sure you know which card is on the bottom of the pile.)

The challenge is to blow all the other cards off the top of the jar, but to leave the joker in its place.

Here’s a timer so you can see if you’re able to do it in one minute!  If you blow the joker off the jar, you can stack all the cards back up and try again.

Last time we learned about Joseph.  He was one of God’s people, the Israelites, but he ended up living in Egypt, and in the end his whole family moved there.

Today we’re going to jump forward hundreds of years.  The Israelites were still living in Egypt, but the Egyptians had made them their slaves and were treating them very badly.

By this point there were thousands and thousands of Israelites, so God’s promise that Abraham would have many descendants had come true.  And God hadn’t forgotten that he had also promised to lead his people to a land of their own.  He decided he was going to rescue them from Egypt, and he chose a man called Moses to be their leader.

Watch this video to hear the story of Moses, and God’s amazing rescue.

Think for a moment: what does this story teach us about God?

We saw in the video that God was determined to rescue his people from being slaves and that his power is amazing!

Imagine you were one of the Israelites.

This is what the Bible says:

Over the last two weeks, we have thought about some of God’s promises – the promises he made to Abraham and the promises for us in the Bible.  Here’s another one:

You could make something with those words on to remind you of the story of Moses and the Israelites, and of his promise to rescue those who trust in him.

This is one example – a bookmark with blue waves down the sides to represent the sea splitting in two – but you might want to come up with your own idea.  Please ask an adult to send us a picture of what you do – we’d love to see!

God, thank you for your amazing power.  Thank you for the way you rescued Moses and the Israelites, and thank you for sending Jesus to rescue all those who put their trust in you.  Please help us to learn to trust you more.  Amen