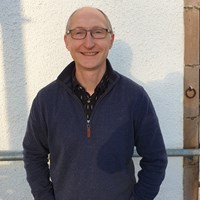 Paul joined SU Scotland in 2008 to lead the growth and development of the ministry at Alltnacriche. He was project lead for Gowanbank in 2018 and joined the Leadership Team in January 2019, overseeing our Centre’s among other things. He’s been involved in SU for donkeys years, first as a participant in the local primary school SU group, then discipleship events and moving on to serve in a number of roles as a volunteer – from the SU’s “Broadreach” project in the 1980’s, workparties at Kingscross, and then leading SU Holidays. He passionately believes that the outdoor environment provides one of the best contexts to work positively with young people and explore the Christian faith.

Prior to joining SU, he worked in a variety of operational risk and financial management roles at RBS, as well as being a director of a youth work charity in Linlithgow. He and his family live close to Alltnacriche, and is often spotted in the outdoors – biking, paddling or walking. He has reached a certain level of maturity and so is a blue-sky-day-only skier. He is also an elder in his local church, where he sometimes teaches and leads worship. He also gets weirdly excited by spreadsheets and data, but doesn’t do social media.