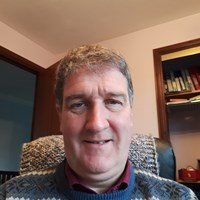 Member, Board of Trustees

Kenny was ordained as a Church of Scotland minister in 1989 and has served in three parishes - Glasgow (7yrs), Dundee (21yrs) and moved to Perth in November 2017. His wife Anne is an ordained minister with a focus on pioneering ministry. They have three daughters - Amy is a vicar in the East End of London and runs a Youth for Christ centre in Newham. Rachel is a solicitor in Dundee and Katie is part of the team at Junction 12. Their son-in-law, David, works for UCCF and they have a 6 week old granddaughter, Hannah. As a student, Kenny served on a few SU camps at Kings Cross and in his 21 years in Dundee ran a local SU group in the local primary school. All three girls would speak very highly of the impact of Scripture Union holidays on their growth in faith. Kenny and Anne both have season passes for Murrayfield and Hampden