Some readers may be thinking, "The SU whaaaaat?" To put it simply, SU supporters donate stamps, the SU stamp team organises them and prices them and the stamp collecting community out there (the philatelic community, to give them their formal name) - both around Scotland and more widely - buys them. In short, there is a "magic wand" effect, whereby donated stamps are transformed into money. Over the 50 years that we have been operating, this work has brought in over £40,000 which otherwise just would not have been there; in other words, it is "found money".

Within the past year, the SU Stamp Bureau has started selling through E-Bay, and we have found ourselves dealing with an unexpected range of customers in unlikely and far-away places. For example: We sold a set of New Zealand stamps showing butterflies and moths to a collector in Tromso, Norway. Even further away, we sold a Swiss special cover commemorating the opening of the Luzerne to Engelberg Railway to a collector in Bangkok, Thailand. Continuing the theme of our "global reach", we sold stamps from Mahra, South Arabia, to a collector in Slovakia. Some collectors are interested in themes, rather than countries, and we sold to a collector in the Isle of Man a postcard depicting the last Lancaster bomber still flying. On the subject of wartime, we also sold a wartime envelope sent from Hamilton, Bermuda and carried on a ship called the "Lady Drake" (wife of Sir Francis), which was subsequently sunk by U-boat No.U106 - a fascinating story.

Finally, and to illustrate the point that we can never read collectors' minds and anticipate what they might want, we sold a set of stamps from Vietnam, depicting fruits, to a collector in Lithuania. Who would have imagined such unlikely connections?

These are just a few of many, many sales made to a wide range of collectors, including, as one might expect, those in just about every corner of the British Isles. All this depends, of course, on our supporters continuing to donate interesting material to us, so please keep donating! If you have stamps which you think might be of use to us, please contact John Mowat at the Glasgow Office or our stamp team leaders, Alistair Lawson or Karen Todd. 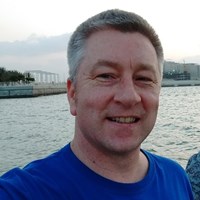 I joined SU Scotland in 2004, and my role involves various elements of fundraising. This includes, but is not limited to, coordinating our three annual appeals, overseeing applications to supportive trusts and foundations, assisting staff with their own support raising, attending some events to promote our ministry, contact with volunteers and other initiatives. I am always happy to hear from volunteers who have fresh fundraising ideas!